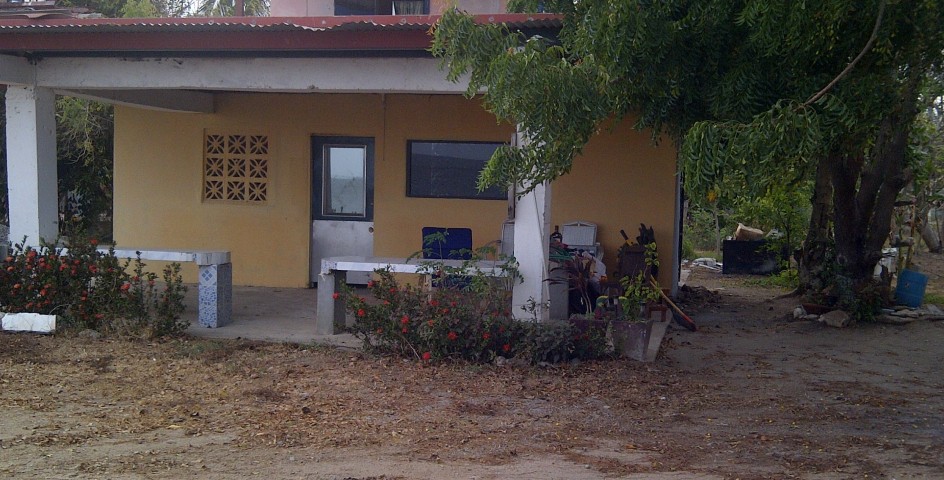 I defend my, and our, rights, powers, property and privacy on behalf of myself and all people so similarly situated.

Sov
Added a post
It is not just Australia

It's the whole world that has been scammed and is in play and YOUR LIFE is at stake. Still most sit and do nothing.

Sov
Added a post
Info on the Swab - EO

Sov
Added a post
Yes, you ought to be angry

Let's go back to the round oak table in my Mother's dining room and General Roy Schwasinger sitting there with a cup of coffee in his hand and a very intense look on his face as he said, "It's all a con game. "The Joint Chiefs of Staff had "cause to know" that something was desperately wrong in this country in 1975.

They requested help from military generals such as General Ray Schwasinger, to sit in the court room to ensure the bribed judges would vote according to constitutional law. These court cases ran up and down various state and federal courts from 1970's till the 1990's. Then in 1992-1993, the farmers appealed their case to the US supreme court.

← Why the Military Can’t Afford to Wait

Let’s take a little walk down memory lane. Let’s go back to 1975.Wisconsin was still reeling from the then-recent memory of the Milk Riots, where farmers acting in support of the National Farmers Organization (NFO) dumped millions of gallons of milk on the streets and down the storm drains of Milwaukee and other cities in protest of rigged commodity markets and rigged bank loans that were forcing the farmers to operate at a loss and causing the loss of family farms to agricultural conglomerates throughout the Midwest and the Western States.

Let’s go back to the round oak table in my Mother’s dining room and General Roy Schwasinger sitting there with a cup of coffee in his hand and a very intense look on his face as he said, “It’s all a con game.  The Joint Chiefs of Staff had “cause to know” that something was desperately wrong in this country in 1975. They were told. They did nothing.  In 1980, SCOTUS was also told. They agreed that General Roy and the Farmers were correct in their claims and charges, but since those claims and charges were addressed to a bankrupt corporation, they claimed that they could do nothing to provide remedy, so the findings were useless in terms of remedy or relief, and were promptly “sealed”.

Again, the Joint Chiefs of Staff had “cause to know” and did nothing.  As a result, millions of Americans have lost their homes, farms, and businesses. As a result, millions of Americans have suffered broken marriages and broken families. As a result, millions of Americans have received faulty substandard educations. And millions more have languished in jail for crimes they didn’t commit and for victimless “crimes”, and have suffered under forms of law that never applied to them. Millions more paid large portions of their earnings as “income taxes” when they didn’t have a penny of “Federal” income to tax, and paid 7.5% of their gross earnings as “Social Security Taxes” because they were “mistakenly” enrolled in a “Federal” pension insurance scheme they were never eligible for in the first place.

Millions of Americans have been impersonated and mischaracterized in flagrant violation of both the Hague Conventions and the Geneva Conventions and this has been going on full bore under the noses of the Joint Chiefs for over fifty years and they haven’t done a goddamned thing to stop it.  Millions of Americans have had their constitutional guarantees denied and stomped on by District Courts operating in ways that District Courts are not allowed to operate and addressing “subject matter” that District Courts are not allowed to address under any Constitution— and the Joint Chiefs have sat there like so many toads and they have done nothing to stop it.

I read the “Memorandum” these men sent out to all branches of our military, talking about how they support the Constitution — and I wanted to throw up.

If the Joint Chiefs and their Predecessors had supported the actual Constitution and done their jobs, then our country would not be in crisis now. We and the rest of the world could have been spared two World Wars and countless mercenary conflicts.  All the millions of Americans who have been harmed and denied their constitutional guarantees could have lived in the peace and the safety that they are owed by these big, fat, bloated, useless Toads.  And we would not be listening to a bunch of sanctimonious crap from men who are duplicitously acting as Municipal Officers when in fact the Municipality of Washington, DC, and its “Government” have grossly usurped against both the actual Federal Constitution and The Constitution of the United States of America.

These “Municipal” Joint Chiefs are phonies. Fakes. Not occupying the offices they are supposed to be occupying. They are dodging their actual duties owed to the actual people and States of this country —- again.

Out of respect for their calling and their years in grade, I might be inclined to “respect” them and “trust” them, but I have history staring me in the face, and at least fifty years of my own direct experience with these yahoos, and I know what they are doing and I know what they should have done a long time ago and what they failed to do —- and what it cost us all.  So I am not trusting them and I am not respecting them. I am calling them on the carpet as their employer and demanding immediate action to put a stop to any further usurpation by the Municipal Government, and failing that, I am declaring the Joint Chiefs in Mutiny against the lawful government of these United States.

When you are aware of a crime against humanity and against Public Law and against the Constitutions, and you don’t do anything to stop it, you are an accomplice to the crime. Every man who signed that Memorandum has “cause to know” what his actual duty is. Every single one of them has “cause to know” that the Municipal Government has acted outside its constitutional role and authority to the detriment of this country and its people.  The obligation of the Joint Chiefs to stand against crime applies to them just as it applies to anyone else, and under international Military Law, these men are treading the fine line of treason, piracy, and a host of other exceedingly serious crimes.  So this is our message back to the Joint Chiefs this morning: you owe your allegiance to this country and your service is under The Constitution of the United States for America, not The Constitution of the United States.  Get your rumps in gear and do the right thing, or you will be identified as part of the problem and removed from office without further ado. 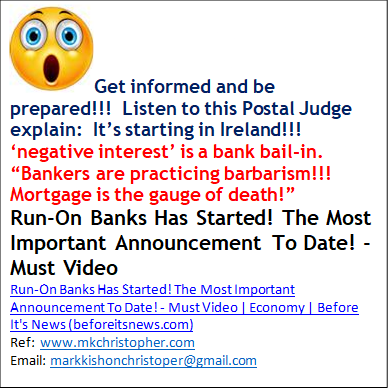 Get informed and be prepared!!! Listen to this Postal Judge explain: It's starting in Ireland!!!
'negative interest' is a bank bail-in
"Bankers are practicing barbarism!!!
Run-On Banks Has Started! The Most Important Announcement To Date

NOTE: As Brother John and others have told us, the Federal Postal Court is the highest court on the planet.  The following message is packed with information and education you should learn, know and make immediate adjustments immediately.

Now you may have a basis for understanding or realizing where the push is coming from for transhumanism and modifying you genetic make up against your will and knowledge.

GOOD picture. Good to see you again. Send me one of family when/if you can. Be fun to see wife and all.

This is from a few years back when I sponsored a float in the local community parade in Panama.  For $50 they loaded up a cart pulled by a cow with Rum and I had to walk and dance all through the down for the afternoon. Haaaa  I was happy with my Sovereign banner.  Have had good support at the UN, been there on four occasions standing from the rights of the individual, collectively and individually.

Sov
Added a comment to Howdy all from Big Sky Country! I am looking forward to traversi...

Steve, this is my non-administrator ID. Blessings. Look forward to hearing back from you. R.

Sov
Added a post
Will you turn on your neighbor?

Germany all over again? Will you turn on your neighbor, Judas?

Extermination begins, with your help? 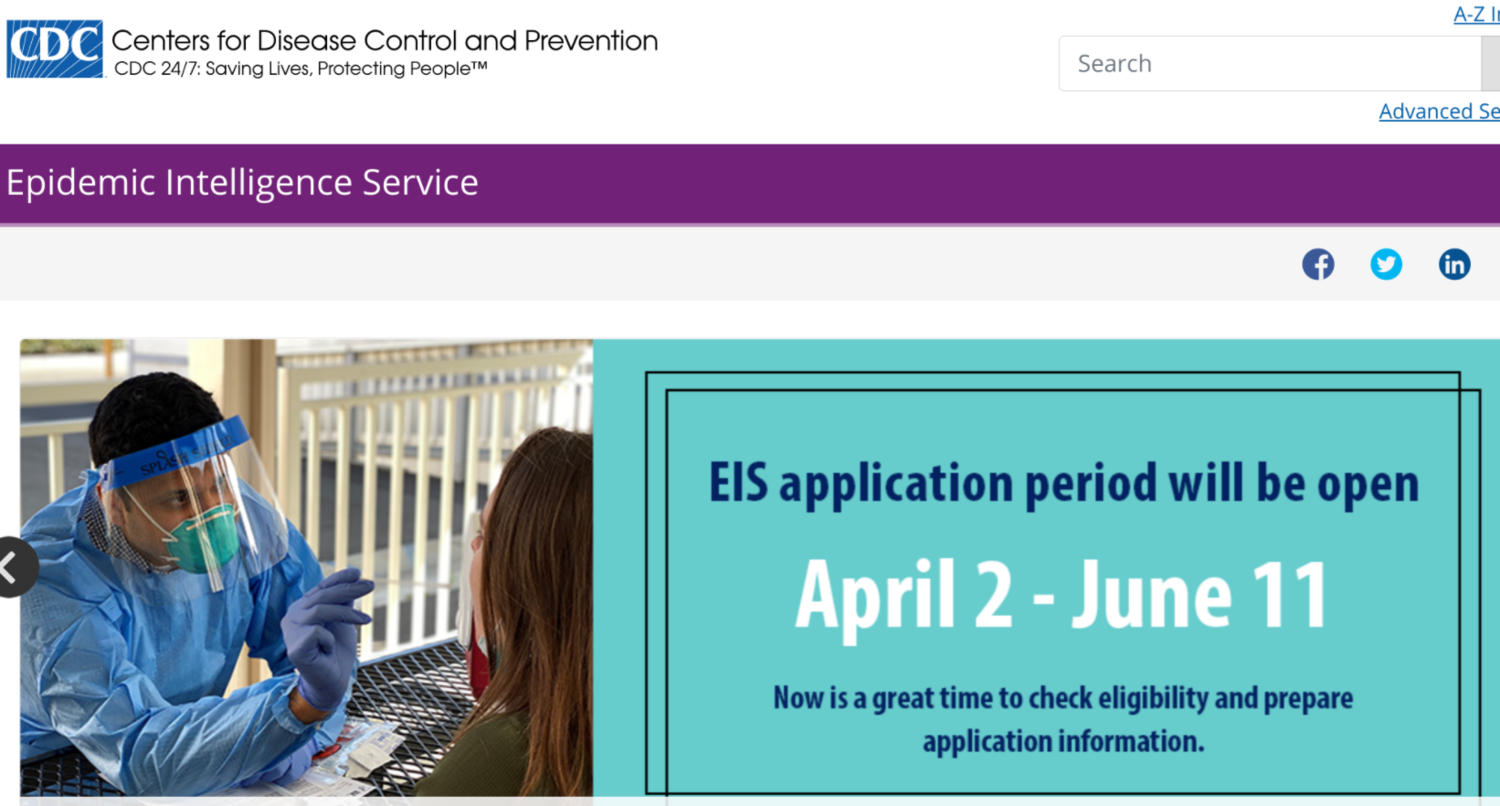 When with the people and parents stand up? Possibly take the perverted adults to the back of the tools shed for their own correction?

SA: When a Secretary of State deletes public records and documentation of official business isn't that an obvious personal crime against the people?

Sov
Added a post
SA: What Are You Waiting For?

SA: What are you waiting for? Why do you continue to protest against your rulers/Legislators/representatives (who don't) and other Public Servants? Why do you continue to petition your masters? When will you "throw-off" and choose to self-govern directly? Yes, NEVER remains an option for you, not for me. I already have. I executed and exercise my only DUTY as an American. What are you waiting for?

Sov: We now know and have it confirmed that Windmills 1) cost more energy to produce than they will produce 2) the maintenance and failure level is cost prohibitive 3) the removal and bury the pollution problem is a expensive and destructive non-solution. 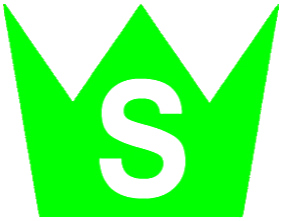 My Posts
It's the whole world that has been scammed and is in play and YOUR LIFE is at stake. Still most sit and do nothing.

It is not just Australia

Info on the Swab - EO

Yes, you ought to be angry

Now you may have a basis for understanding or realizing where the push is coming from for transhumanism and modifying you genetic make up against your will and knowledge. https://www.youtube.com/watch?v=kzSoFVZGehw

Germany all over again? Will you turn on your neighbor, Judas? CDC recruitment campaign starts Friday for EIS health police to enforce lockdown Extermination begins, with your help?

Will you turn on your neighbor?

Search
Are you sure?
Please, enter a value here